While the hot-as-magma market for guns and ammunition has dominated the news, optics are also selling at a record pace. Fortunately, optics manufacturers have been able to develop and introduce a dizzying array of new products, including new thermal & nightvision optics. https://www.shootingillustrated.com/content/2021-new-optics-guide-thermal-and-night-vision-optics/

Between magnified riflescopes, electro-optics and plain ol’ iron sights, today’s rifle shooters can pretty much take care of everything from the muzzle to several thousand yards (or meters) away. Picking one setup for a narrow range of distances is no problem, but it gets trickier when you need to skin several cats at once.https://www.shootingillustrated.com/content/are-scout-style-riflescopes-still-a-viable-option/ Our Photo Of The Day brings some French cuisine to the table. I understand why the manufacturer abbreviated “Fusil d’Assaut de la Manufacture d’Armes de Saint-Étienne” the way they did. FAMAS is a lot easier to pronounce and remember. Don’t you agree? Below: These boots are made for walking. These pictures come from the 35e régiment […]

Since Glock launched the compact G43 series back in 2015, it has come out with a slightly larger, yet still slimline, version with a 10-round capacity, the G43X.https://www.americanrifleman.org/content/the-g43x-glock-s-expanded-capacity-ccw-pistol/ Red Wing, Minnesota-based X-Vision Optics have introduced their affordable PRISM PSRD1, a 4-power optic with an illuminated reticle with three color options (red, blue, and green). The PRISM has a 12 yd @ 100 yd field of view and a battery life of 20 hours. Here’s what X-Vision Optics have to say about the PRISM: The PRISM Sight […]

Biden vows retaliation for bombings that killed US forces and Afghans 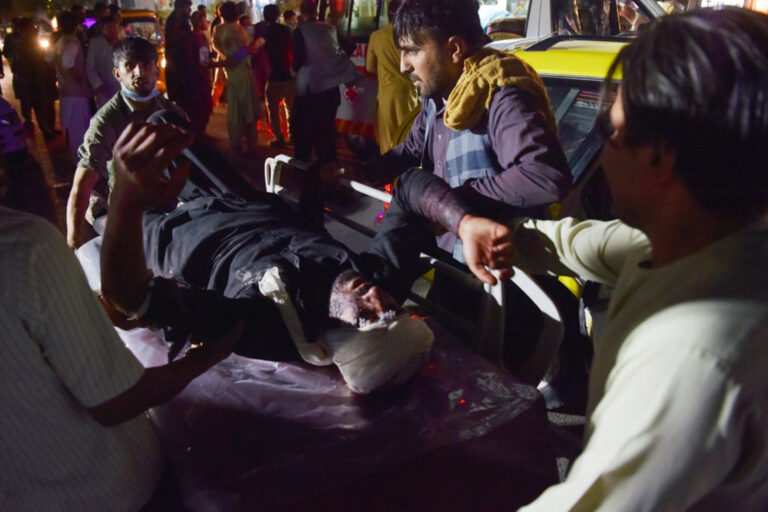 President Joe Biden vowed to retaliate after 13 U.S. service members and dozens of Afghan civilians were killed Thursday in an attack by Islamic State terrorists — days before American forces were scheduled to finish their withdrawal from this city’s airport.

The episode appeared likely to become a bloody punctuation mark on two decades of U.S. military involvement in Afghanistan, and Biden said he remained committed to pulling out of the country despite his pledge of retribution.

The attack, one of the deadliest on U.S. forces since the war began, involved two bombings, one at an airport gate where Afghan civilians had lined up in hopes of catching a flight out of the country, and another at a nearby hotel that has been a staging ground for evacuees. Then gunmen opened fire, adding to the bloodshed.

“I saw a flash, and then everyone just started running into each other,” said Mohibullah Atayi, 18, who had been trying to get in line at the airport and was about 300 yards from the first explosion. “It was chaos.”

He was unscathed, but his brother, 30-year-old Gulnur Atayi, who once worked as a security guard at a U.S. base in the western city of Herat, suffered wounds to his arms and legs and received a blood transfusion.

Islamic State in Khorasan, also known as ISIS-K, a local offshoot of the Iraq- and Syria-based terrorist group, claimed responsibility for the attack, according to the affiliated Amaq news agency. The organization is hostile to both the Taliban, the fundamentalist group that took control of Kabul this month, and U.S. troops, a reflection of the volatile environment in Afghanistan as Biden tries to finalize his administration’s withdrawal.

Since the evacuation began less than two weeks ago, thousands of Afghans have converged on the airport under the hot sun in an effort to flee the country.

On Thursday, that scene of desperation was transformed into one of carnage. Video from the attack’s aftermath showed bloodied corpses strewn near a sewage canal that runs along the airport’s outskirts. Some of the dead had to be fished out of the canal.

The wounded were rushed to nearby hospitals. Habib Jan, 35, lay amid an arsenal of beeping machines, his head and face covered with bandages, his body restless, his chest heaving.

His brother-in-law explained that Jan had been carrying an invitation to the United States from a relative there, hoping it would help get him onto a flight. Now Jan needed to be moved to another medical facility for neurosurgery, but that couldn’t happen immediately.

“We don’t have any ambulances,” a doctor explained. “They’re all being used.”

Ramin Sarwary, 30, kept vigil outside another medical center for word of his friend’s brother, who had managed to get permission to travel to the United Kingdom.

“He wanted to leave this country,” Sarwary said. “Now we’re waiting here for news if he’s alive or dead.”

The attack realized Biden’s fears of a terrorist threat against the evacuation effort, something he had repeatedly warned about as he pushed to complete the operation as soon as possible.

“Every day we’re on the ground is another day we know that ISIS-K is seeking to target the airport and attack both U.S. and allied forces and innocent civilians,” he said Tuesday.

Now his promise of retribution will require a difficult balancing act. Biden said he would authorize additional military forces if necessary to retaliate against an elusive foe, but he appears reluctant to take any step that would prolong U.S. involvement in Afghanistan or risk American lives in a conflict that he already views as a lost cause.

“We will not be deterred by terrorists,” Biden said. “We will continue our evacuation.”

An additional 7,000 people were flown out after the attack Thursday — a slower pace than previous days, but a sign of U.S. determination to continue the operation despite the danger. Roughly 100,000 people have been evacuated in less than two weeks as U.S. troops provide security at the airport.

“This is close-up work,” said Marine Gen. Kenneth McKenzie of U.S. Central Command, which oversees operations in Afghanistan. “The breath of the person you are searching is upon you.”

The State Department on Thursday estimated that 1,000 American citizens were still in the country. Only a small number indicated that they planned to stay, with the rest taking steps to leave.

In addition, there are tens of thousands of Afghan allies who risk Taliban reprisals if they are not evacuated. Biden acknowledged that the U.S. would not be able to help everyone who wants to leave.

“Getting every single person out can’t be guaranteed,” he said.

The attack plunged the White House into crisis mode. Biden spent much of Thursday being briefed by national security officials, including commanders on the ground in Afghanistan. An Oval Office meeting with Israeli Prime Minister Naftali Bennett was delayed until Friday; a public health briefing on the COVID-19 pandemic was postponed; and a virtual conference with governors to talk about resettling Afghan refugees was canceled. Vice President Kamala Harris canceled a political visit to San Francisco on Friday to help Gov. Gavin Newsom fight off a recall campaign.

The Pentagon warned that there could be more attacks on the evacuation effort. ISIS-K has been eager to embarrass the Taliban by revealing its inability to govern and maintain security. It previously claimed responsibility for bombing a girls’ school in Kabul, killing dozens of students.

The situation has created an unusual, cooperative arrangement between U.S. forces and the Taliban. The fundamentalist group never completely severed ties with al-Qaida, the terrorist network responsible for the Sept. 11 attacks that originally sparked the war in Afghanistan, but now there’s a shared interest in seeing Americans depart as soon as possible.

McKenzie, the Marine general, said the two sides were in frequent communication about security at the airport, and the Taliban has conducted preliminary screenings of evacuees before they’re searched again by U.S. forces once they reach the gate. He even believed that the Taliban had helped thwart potential terrorist strikes.

Biden said there was no sign that the Taliban had enabled Thursday’s attack.

“No one trusts them,” he said. “We are just counting on their self-interest.”

Taliban spokesman Zabihullah Mujahid condemned the bombings, saying the Islamic Emirate — the group’s name for Afghanistan — was paying close attention to the security and protection of its people. But he also deflected blame onto the United States, tweeting that the bombings had taken place in an area “where U.S. forces are responsible for security.”

On Capitol Hill, members of Congress acknowledged that a terrorist attack was among their biggest fears given the chaotic withdrawal.

Republicans largely placed the blame on Biden’s handling of the evacuations, with some members calling for resignations even before the details of the attack were known. Democrats largely focused on the need to resume evacuations as quickly as possible.

“This is a full-fledged humanitarian crisis, and the U.S. government personnel, already working under extreme circumstances, must secure the airport and complete the massive evacuation of Americans citizens and vulnerable Afghans desperately trying to leave the country,” Senate Foreign Relations Committee Chairman Robert Menendez, D-N.J., said in a statement.

House Minority Leader Kevin McCarthy, R-Calif., said “President Biden must take decisive action to protect our troops, our citizens, and our allies without regard for an arbitrary deadline.”

He called the bombings “horrific” and said “our enemies have taken advantage of the chaotic nature of the withdrawal.”

The Trump administration sidelined the Afghan government last year and cut a deal with the Taliban to withdraw U.S. troops from the country by May 1. Biden shifted the deadline to Sept. 11 — revising the target to Aug. 31 over the summer — but has been adamant about ending the U.S. military presence there.

Biden said this week that he was asking the Pentagon and State Department for contingency plans if more time was needed to complete evacuations. But as he ended his remarks Thursday, he said there were no second thoughts about leaving Afghanistan.

Read today’s “The Armed Citizen” entry for real stories of law-abiding citizens, past and present, who used their firearms to save lives.https://www.americanrifleman.org/content/the-armed-citizen-august-27-2021/

How Important is a Fast Draw for Personal Defense with a Handgun?

What is a suitable quick-draw time, and how important is that for the armed defense with a handgun? https://www.shootingillustrated.com/content/how-important-is-a-fast-draw-for-personal-defense-with-a-handgun/

In today’s episode of “I Carry,” we have a Glock G19 Gen4 9 mm pistol carried in a Blackhawk T-series L3D light-bearing holster with a Blackhawk/Streamlight TLR1-HL weaponlight attached.https://www.shootingillustrated.com/content/i-carry-glock-g19-gen4-pistol-in-a-blackhawk-t-series-l3d-holster/