‘Person of interest’ being questioned in Chicago shooting of 2 ATF agents, 1 police officer who were working undercover 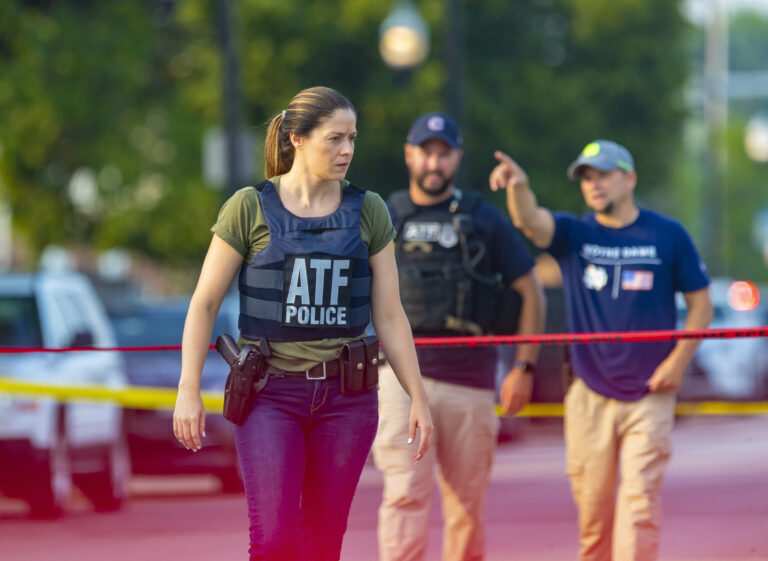 A “person of interest” was being questioned by Chicago police hours after a police officer and two federal agents were shot while on duty early Wednesday on the Far South Side, officials said.

The three law enforcement officers were fired upon at 5:50 a.m. while they were in an unmarked police vehicle on their way to conduct a joint investigation between Chicago police and the U.S. Bureau of Alcohol, Tobacco, Firearms and Explosives, police Superintendent David Brown said Wednesday during a news conference outside Advocate Christ Medical Center in Oak Lawn.

By 2 p.m., detectives had identified a person of interest, and questioning was underway. A police spokesperson gave no additional information about the development, including whether the person was a man or woman, or what time the person was taken into police custody.

The victims were a male Chicago police officer and one male and one female agent from the ATF. They were shot in the 11700 block of South Ashland Avenue, near a northbound ramp to Interstate 57 from 119th Street, in West Pullman, at its border with the Morgan Park neighborhood, Brown said. The shooting was about a mile from the Chicago Police Department’s 22nd District station in Morgan Park.

The police officer suffered a graze wound to the back of his head. One ATF agent was shot in the hand and the other was shot in the side of the torso, Brown said, but did not detail which agent suffered which injury.

Fire Department paramedics took the Chicago police officer with a graze wound to Christ Medical Center, an agency official said. The two agents were either taken for treatment by other officers or in private vehicles. Brown later said all three were being treated at Christ Medical Center, where their conditions were stabilized.

The two ATF officers were discharged after 1 p.m., said Kimberly Nerheim, an ATF spokesperson. The police officer was released from the hospital, said Anthony Spicuzza, a spokesperson for the Chicago Police Department.

A white four-door Chevy believed to be connected to the shooting was located in the 200 block of East 89th Place in the Chatham neighborhood, according to a police source.

The shooting captured the attention of the White House on a day when President Joe Biden visited the Chicago area.

Biden did not address the incident in his remarks in northwest suburban Crystal Lake, but White House officials said the president had communicated with Mayor Lori Lightfoot about it and expressed concern for the victims and their families.

White House press secretary Jen Psaki noted that Chicago is one of five cities the Department of Justice is going to be working with to launch “a gun trafficking strike force.”

All three officers, including the two with the ATF, were “senior officers,” with multiple years on the job, officials said.

The multiagency team was conducting an undercover investigation and was on its way to a location as part of that work when a “suspect or suspects” opened fire on the team as it traveled on the on-ramp to Interstate 57 north near 119th Street, authorities said.

“They were working in an undercover capacity, so we’re limited in what we can say about what they were doing and why they were doing it,” Brown said. “But they were fired upon while driving, all in the same car, trying to enter onto the on-ramp. It was an unmarked, undercover vehicle.”

He did not answer additional questions or provide further information on the joint operation, saying he did not want to reveal details that could hinder the investigation.

“We don’t want to give away what we know — we want to catch these suspects as soon as possible,” he said. Asked whether his use of the plural “suspects” meant there was more than one shooter, Brown said that was not confirmed; he meant it to be all-encompassing.

The three officials shot were among five law enforcement officers who have been wounded in Chicago shootings this week. Early Monday, a Chicago police sergeant and Cmdr. Patrina Wines, who is in charge of the Austin patrol district,were shot in the 100 block of North Long Avenue on the West Side. Wines was shot in the foot, and the sergeant was grazed in the leg; those officers’ injuries were not life-threatening.

“This is a very challenging time to be in law enforcement, but they are rising to the challenge of doing all they can. And the work they do is extremely dangerous,” Brown said Wednesday morning.

Brown said 36 officers have been shot or shot at in Chicago this year.

“I think this highlights some of the things I’ve been saying over the last several weeks. The officers are performing their jobs at the highest level. They’re risking everything to protect the people of Chicago and this includes our collaboration with ATF officers,” he said. “They are doing their part, and no one would do what these officers do right now.”

Brown was joined at the news conference by representatives of the ATF, including Kristen de Tineo, special agent in charge of the Chicago Field Division.

“We just want to appeal to the public, as we get more information we will be asking you to help. Please keep these agents and this officer in your thoughts and in your prayers,” de Tineo said.

Concluding his remarks and a question-and-answer session with reporters in less than five minutes, Brown echoed de Tineo’s sentiment.

“God bless Chicago police officers that do this job in the bravest, most courageous ways, with their commitment and dedication on display every single day for the people of Chicago,” he said.