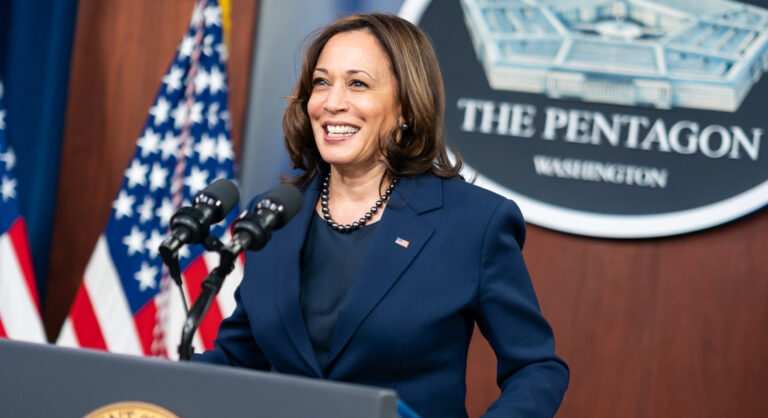 Vice President and Border Czar Kamala Harris will head to the U.S.-Mexico border for the first time this week after former President Trump announced last week that he had accepted an invitation by Texas Gov. Greg Abbott to visit the border on June 30.

The vice president, who was tapped by President Joe Biden to lead the border effort in March, will travel to El Paso, Texas, on Friday and is expected to be joined by Homeland Security Secretary Alejandro Mayorkas, according to a statement from Senior Advisor and Chief Spokesperson Symone Sanders emailed to American Military News.

In a statement emailed to American Military News, Trump blasted the vice president’s travel announcement, saying she wouldn’t be going if not for his own trip.

“After months of ignoring the crisis at the Southern Border, it is great that we got Kamala Harris to finally go and see the tremendous destruction and death that they’ve created—a direct result of Biden ending my very tough but fair Border policies,” Trump wrote. “Harris and Biden were given the strongest Border in American history. And now, it is by far the worst in American history.”

“If Governor Abbott and I weren’t going there next week, she would have never gone!” he concluded.

Last Tuesday, Mr. Trump announced that he would join Gov. Abbott in an official visit to the “decimated” southern border.

“The Biden Administration inherited from me the strongest, safest, and most secure border in U.S history and in mere weeks they turned it into the single worst border crisis in U.S history. It’s an unmitigated disaster zone,” Trump wrote in a statement emailed to American Military News.

Trump slammed the current administration’s handling of the border, accusing both Biden and Harris of handing “control of our border over to cartels, criminals, and coyotes. Drug dealers, MS-13 gang members, human smugglers, sex traffickers, and the criminal elements of the world now have free reign.”

“If this weren’t bad enough, Biden and Harris won’t even tour the scenes of the wreckage they created, or come down and visit with the Border Patrol and ICE heroes risking their lives to defend our Nation at a time when the White House is doing everything it can to make their job totally impossible,” Trump stated.

“What Biden and Harris have done, and are continuing to do on our border, is a grave and willful dereliction of duty,” he added.

Earlier this month, Harris laughed off plans to visit the US-Mexico border during an interview with NBC, saying she would visit the border “at some point.”

During an international press conference in Guatemala, Harris said that she will not visit America’s southern border because to do so would be a “grand gesture.”

On March 24, Biden announced that Harris would lead efforts at the southern border “because she’s the most qualified person to do it.”