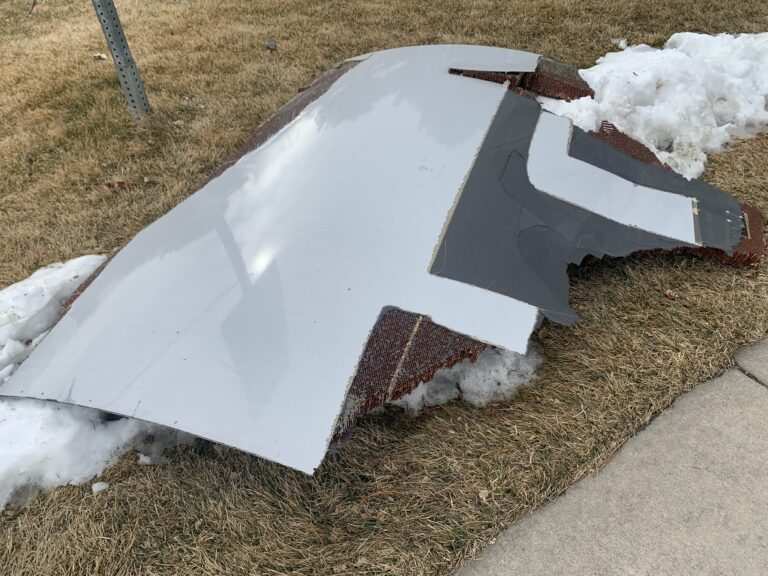 Broomfield, Colo. police on Sunday released some of the audio from 911 calls made by residents after a commercial jet had an engine failure Saturday and dropped parts over the city.

Police began receiving calls at 1:08 p.m. Saturday from residents who said they thought a plane was falling from the sky. Debris landed mainly in Commons Park and the Red Leaf and Northmoor neighborhoods, police said.

In the scanner traffic released by Broomfield police, a dispatcher says they are receiving a lot of calls “for an airplane that possibly exploded in the air.”

“It looks like it exploded, there are parts everywhere,” a dispatcher said. “There are literally parts falling all over the city.”

People calling 911 reported hearing a loud boom and large debris falling. As more calls came in, several told dispatchers they could see the plane still flying. Dispatchers promised to send help and asked callers to hold on as they were “getting blown up with 911 calls.”

“I was just outside my house,” one man in central Broomfield said in his call. “A jetliner flew right overhead. There was a small boom, and it looked like some debris fell out of it.”

A woman walking her dog at 17th and Cedar called to say “an airplane engine just exploded,” then added that “it’s going to hit the Commons right now.”

Another woman, on the corner of Northmoor park, reported that “a piece of it just flew, just landed right in front of me … it almost landed on my head.” When asked if she should pick it up, the dispatcher advised her to leave it there.

The plane, a United Airlines Boeing 777, was destined for Honolulu and was forced to turn back to Denver International Airport and make an emergency landing, according to The Denver Post. The plane’s 231 passengers were safely evacuated, the Post reported.

Rachel Welte, Broomfield Police Department spokesperson, said it was “so unbelievable” that no one was hurt, given how busy the park was — including several Broomfield Soccer Club teams practicing on a field where debris landed.

While no one was injured by the falling debris, the police department has received reports of property damage, she said.

She said a truck appears to be totaled at the home of a resident on Elmwood Street where an engine ring landed in the front yard, hitting the truck. Another homeowner had a piece of debris pierce through the roof, entering the home, she said.

United Airlines is handling the damage claims. To file a damage claim, go to united.com/en/us/customercare.

The National Transportation Safety Board is investigating the incident. The NTSB collected most of the fallen debris Saturday, taking it to a hangar at DIA. Residents who find more large pieces are asked to call Broomfield police dispatch at 303-438-6400 so police can collect them.