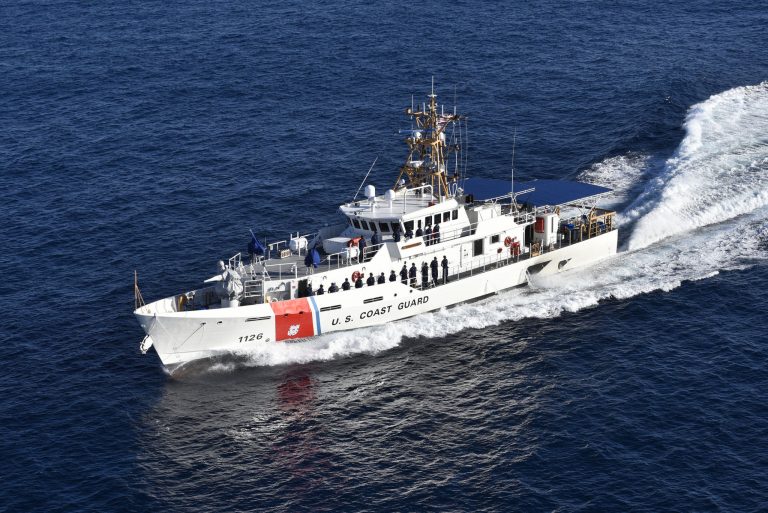 The Coast Guard in Hawaii recently wrapped up a 30-day demonstration and evaluation of two ship drone versions to better patrol the vastness of the Pacific as the Navy’s U.S. Pacific Fleet, also in the drone hunt, plans a “fleet battle problem ” exercise early next year using unmanned systems “on the sea, above the sea and under the sea.”

“It’s clear that autonomous technology is a growing industry and has great potential to enhance Coast Guard operations, ” Cmdr. Blair Sweigart, with the Coast Guard Research and Development Center, said in a release. “Combined with artificial intelligence algorithms, unmanned systems could be a game changer.”

The Coast Guard in February awarded two contracts worth nearly $1.7 million for unmanned surface vehicles supplied by Saildrone Inc. of Alameda, Calif., and Spatial Integrated Systems of Virginia Beach, Va. The latter system is based on a 23-foot interceptor boat outfitted for autonomous operations.

In October, a fleet of six Saildrone vessels began the month-long demonstration of autonomous capabilities off Hawaii. The company noted that Congress tasked the Coast Guard with examining the feasibility, costs, and benefits of using unmanned platforms to improve maritime awareness in remote ocean areas.

The six saildrones, which are capable of “picket line ” formations to cover a broad area, were stationed in an operating area adjacent to Penguin Bank, west of Molokai.

The 23-foot wind and solar-powered vehicles, which have previously crossed the Atlantic, are designed for long-duration missions at sea with an optical array and machine learning software that fuses data from a variety of sensors, recognizes targets of interest, and were able to alert the Coast Guard in near real time, according to Saildrone.

“The saildrones successfully detected and tracked the target vessels performing behaviors associated with IUU fishing, such as longline fishing at the edge of a restricted zone and turning off their automatic identification system (AIS ), or going dark, while entering protected areas, ” Saildrone said.

Sweigart said the demonstration vessels “proved to be very effective across a variety of mission areas ” and the results of the study will help shape how the Coast Guard incorporates unmanned surface vehicles into future operations.

The Coast Guard said it continues to install Insitu ScanEagle small unmanned aircraft systems with 16-foot wingspans on its national security cutters, with the Honolulu-based Kimball already having the capability and Midgett getting it. In September that capability was used to aid in the search for a person in the water who was rescued off Hawaii, the Coast Guard said.

In September, speaking at a RAND Corp. event, former Defense Secretary Mark Esper noted that the Pentagon has prioritized China and then Russia as the nation’s top strategic competitors.

To maintain overmatch with China, the future Navy fleet needs to be “made up of more and smaller surface combatants ; optionally-manned, unmanned, and autonomous surface and subsurface vehicles ; unmanned carrier-based aircraft of all types ; a larger and more capable submarine force ; and a modern strategic deterrent, ” Esper said.

Unmanned systems will perform a variety of warfighting functions, from delivering fire and laying mines, to conducting resupply or surveilling the enemy, Esper said.

“This will be a major shift in how we will conduct naval warfare in the years and decades to come, ” he said.

In that context, Rear Adm. Robert Gaucher, who is with Pacific Fleet, announced in September a fleet battle problem planned for early 2021 “that is centered on unmanned, ” U.S. Naval Institute News reported. “It will be on the sea, above the sea and under the sea.”

Some of the unmanned systems in the Pacific include two MQ-4C Triton aircraft that operate out of Guam. In 2019, the 132-foot trimaran Sea Hunter became the first ship to autonomously navigate from San Diego to Pearl Harbor and back again with only short-duration boardings to check electrical and propulsion systems.

The Navy has deployed a modified Iver3 autonomous underwater vehicle, which can be fitted with sensors and sonar technology, from the Pearl Harbor-based Virginia-class submarine USS Mississippi, the news outlet said.

Battle fleet problems are a form of warfare exercises used by the Navy since the 1920s and which regained use in 2018 for ship groups heading from the west coast on Pacific deployments.

Kratos Defense and Security Solutions, meanwhile, announced on Nov. 19 that it had delivered its 100th jet-powered BQM-177A subsonic aerial target and was activating a site at the Pacific Missile Range Facility on Kauai for them. The high-performance unmanned aerial system emulates the most advanced cruise missile threats posed by potential adversaries.