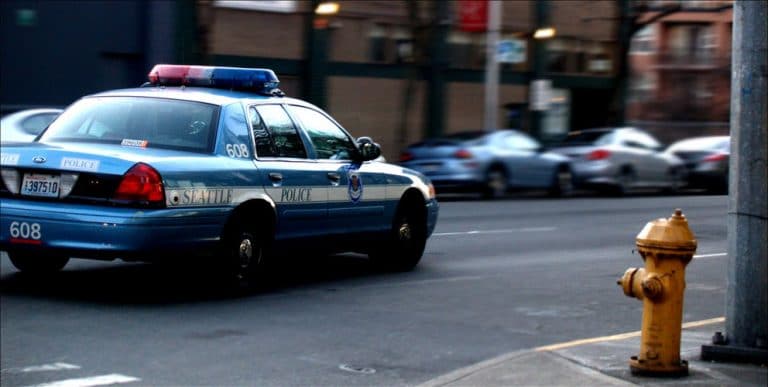 The Seattle Police Department has gone to court to gain access to unpublished media images from the May 30 protests as part of an investigation to identify who allegedly helped set police vehicles on fire and stole firearms from them.

The SPD is demanding the production of unedited photos and video taken over a 90-minute afternoon period by The Seattle Times, KIRO 7, KING 5, KOMO 4 and KCPQ, according to an affidavit for a search warrant and a subpoena document submitted to King County Superior Court.

Brian Esler, an attorney representing the department, said that no action will be taken to demand the images until after a July 16 telephonic Superior Court hearing, and a judge issues a ruling.

“This is really just a narrowly tailored subpoena to try to get footage of events that occurred in public so we can identify the suspects,” Esler said.

The Seattle Times and the other media outlets are contesting this action in a court brief arguing that a subpoena would violate the First Amendment and a Washington state journalistic shield law that sharply limits the circumstance when unpublished work must be turned over to law enforcement.

“There is nothing narrow about the documents that they have served on the newsrooms,” said Eric Stahl, an attorney representing The Seattle Times and other media companies who called it a fishing expedition in a brief submitted to the court.

The media outlets, as well an amicus brief submitted by the Reporters Committee for Freedom of the Press, also outline another major objection. They say that granting the subpoena could foster a public impression that journalists are an investigative arm of law enforcement, which could lead to physical harassment when they cover protests.

“Recent examples of violence against journalists covering protests demonstrate that these concerns are well founded,” stated the Reporters Committee for Freedom of the Press filing, which noted that a journalist covering a May gathering outside a Tucson, Arizona, police station was punched, pushed and kicked by protesters who stated he was “with the police.”

Danny Gawlowski, a Seattle Times assistant managing editor, said in a declaration submitted to the court that one Times photographer was punched in the face by a protester. His statement said that newspaper staff have repeatedly had to explain to protesters that they are independent, and those assurances are instrumental to safely and accurately reporting the news.

The police are seeking “any and all” footage and photographs taken by journalists for the five companies on May 30 during a 90-minute afternoon period in a four-block downtown area between 4th and 6th Avenue and Olive Way to Pike Street, according to a police affidavit.

That tumultuous day included large-scale nonviolent protests. But also by evening 27 people were arrested on suspicion of offenses that included assault, arson and looting. Police, who deployed tear gas and other devices, reported being hit with rocks, bottles and other projectiles.

During the protests, vandals heavily damaged six police vehicles. They smashed windows, removed ballistic helmets, uniforms, emergency medical equipment, fire extinguishers and an accelerant was used to start fires in five vehicles, according to the police affidavit and other documents.

Three of these weapons were retrieved that day, two off them with the assistance of an armed security guard for Fox affiliate KCPQ.

A loaded Glock Model 43 semi-automatic pistol and a loaded Colt M4 carbine rifle with a suppressor remain missing, according to the SPD affidavit.

Through a review of already available videos and photographs, investigators identified one alleged participant in five police car arsons. Her name is Margaret Channon, a Tacoma woman who was arrested June 11 and charged with five federal counts of arson in a case being prosecuted by the U.S. Attorney’s Office of the Western District of Washington.

Police are hoping that additional images will help them identify a second suspect in the arsons as well as in stealing a police firearm. He appears in images already obtained by police, and was dressed that day in a red-colored Adidas brand sweatsuit. One screenshot included in the affidavit is a full frontal image of the individual — in face mask and cap — taken from video by the Seattle Fox affiliate.

This suspect — along with Channon — “seemed to be at the forefront for all the damage and mayhem” that unfolded in the 1600 Block of 6th Avenue and 600 block of Pine Street,” according to a Seattle Police Department affidavit submitted to Superior Court.

The police investigation also includes an effort to identify a man dressed in dark-colored top, shorts and a backpack who walked up to one of the police vehicles, reached in through a broken window and stole a tan-colored fanny pack that contained the still-unrecovered Glock semi-automatic pistol. Police also already have images of this individual that are included in the affidavit.

The Washington state shield law passed to limit law enforcement subpoenas of journalists unpublished work requires that the information being sought is “highly material and relevant” and “critical or necessary” to prove an issue that has a compelling public interest for its disclosure. The law also requires law enforcement to demonstrate that all “reasonable and available means” to obtain the information has been exhausted.

In the brief submitted to the court, the media companies’ attorney argues that the SPD cannot meet “its burden” laid out by the law, and requests that the court hold the subpoenas “not enforceable.”

SPD opted to hire Esler, an outside counsel, to represent the city in this legal action, rather than use an in-house counsel.

Casey McNerthney, a spokesman for the King County prosecutor’s office, said that SPD wanted an expert in First Amendment issues, and “we support that decision.”

If the release of this information is ordered by the court, the prosecutor’s office will recommend that a protective order limit the use of video and images to identifying specific perpetrators, and furthering the criminal investigation.

“We are particularly concerned about the police firearms that have been stolen and unaccounted for,” McNerthney wrote.

Get the latest info on New Gear & Training.
We never spam, and will never sell your email address.
×

We are not American Arms Co.

American Arms Co., was based in North Kansas City, Missouri, and specialized in importing side by side and over/under doubles from Italy and Spain, smoothbores mainly carrying their own label.

They are now out of business, we do not have any information or parts for these firearms.

But please shop our Online Store for new firearms!