They became astronauts together and attended each other’s weddings. Now, they head to space. Meet Bob Behnken and Doug Hurley

|  Blog  |  They became astronauts together and attended each other’s weddings. Now, they head to space. Meet Bob Behnken and Doug Hurley 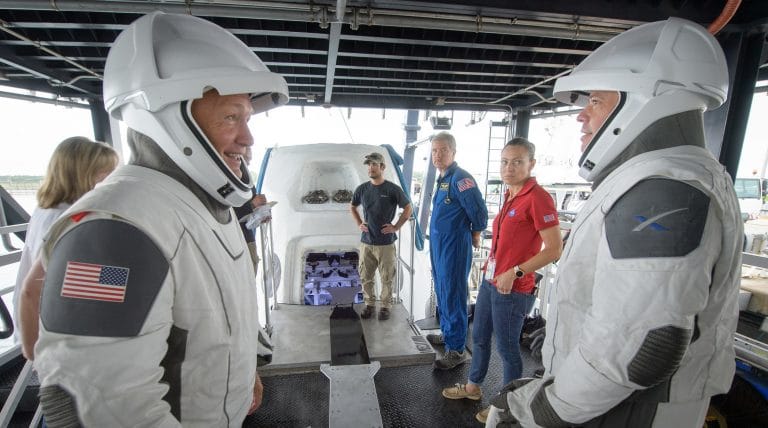 The astronauts kept the flag a secret until launch day in July 2011 — an 8-by-12-inch stars and stripes banner that would carry with it the significance of America’s 30 years in space during the shuttle program.

The flag flew on the very first shuttle mission in 1981 and on the very last three decades later. Astronaut Doug Hurley was there when the crew of the 135th and final shuttle flight carried it with them to leave on the International Space Station, only to be retrieved when America again returned to human spaceflight.

The secret memento was unveiled during a call with then-President Barack Obama.

“I understand it will be kind of like a capture-the-flag moment for commercial spaceflight,” Obama said. “So good luck to whoever grabs that flag.”

Nine years later, Elon Musk’s SpaceX is poised to get the honor, and Hurley will be there again to finish the tradition he helped start, bridging together two very different chapters in America’s spacefaring history.

Astronaut launches are back. And Hurley, along with astronaut Bob Behnken, are about to embark on a journey of a kind that has only taken place five times in American history.

The last time a crew boarded a new vehicle bound for space was in 1981, when John Young and Bob Crippen climbed into the space shuttle Columbia for the first time, that small American flag in tow.

Hurley and Behnken will ride SpaceX’s Crew Dragon to the ISS on Wednesday, if schedules hold, launching from Kennedy Space Center at 4:33 p.m. They’ll reach the ISS a day later and grab the flag from Chris Cassidy, the only American on board, “and put it in a safe place while we do our work,” said Hurley during a news conference earlier this month.

“Then we’ll bring it back when we come back later this summer,” he said.

The two, who came up through NASA’s 2000 astronaut class, have grown to be close friends who can almost anticipate what the other is thinking after years of working together in preparation for the flight.

But there was a time in 2011, when Hurley landed back at Kennedy Space Center on the space shuttle Atlantis, when he wasn’t sure he would ever fly again. It wouldn’t be until he was posed the question in 2015 that he considered returning to space. NASA was already 10 years into the Commercial Crew Program then and had just narrowed down its choice of the two companies that would provide the ride: SpaceX and Boeing.

He and Behnken were assigned to the SpaceX missions, along with Sunita Williams, who will pilot Boeing’s first operational mission and Eric Boe, who was later swapped for astronaut Mike Fincke due to a medical issue. Fincke will fly Boeing’s first crewed flight, which will likely come next year.

The chosen cadre were all space shuttle veterans. Williams once held the world record for the longest spacewalk by a female astronaut. Boe flew two shuttle missions and Fincke flew one, as well as two missions on the Russian Soyuz spacecraft that has taken Americans to space in the nine-year drought since the shuttle program ended.

Behnken, from Missouri, and Hurley, from New York, both became astronauts at the same time, coming from similar backgrounds. Behnken is a U.S Air Force colonel and test pilot, while Hurley is a retired U.S. Marine Corps colonel, having attended the U.S. Naval Test Pilot School in Maryland. And both flew two space shuttle missions before they were selected by NASA to fly for SpaceX.

“As graduates of military test pilot schools, if you gave us one thing that we could have put on our list of dream jobs we could have had someday, it would have been to be aboard a new spacecraft, be conducting a test mission aboard that spacecraft,” Behnken said last week when he and Hurley arrived at Kennedy Space Center ahead of the flight.

While historic, the role they’re assuming as the first test pilots to fly the Crew Dragon vehicle before it enters regular operational missions comes with risks.

Behnken recalled in a 2015 interview that when he was selected to be a part of this eventual mission, there had been three back-to-back accidents with International Space Station flights: A Cygnus cargo capsule was lost when the Antares rocket carrying it exploded shortly after liftoff in October 2014; a Russian Progress 59 cargo capsule lost control in orbit and burned up in the Earth’s atmosphere in May 2015; and a SpaceX Cargo Dragon — the first iteration of the vehicle the astronauts will fly this week — also exploded after takeoff in June 2015. No astronauts were aboard those flights.

Behnken said the incidents highlighted why NASA was moving ahead with two partners, Boeing and SpaceX, in case one should fail.

“We understand the criticality of having redundancy and being able to keep the space station both supplied, as well as populated with healthy crew,” Behnken said in 2015. “Of course, we will be more careful with vehicles that have humans on board.”

Since, he and Hurley have been deeply involved in the process of testing SpaceX’s vehicle, suits, and emergency maneuvers.

Just last week, the two participated in a final simulation with SpaceX at a facility in Houston, where Hurley and Behnken both live. When they finished, they slapped a sticker representing their upcoming mission on the simulator, an astronaut tradition that signaled they were ready to ride the real thing.

“We are so excited to be in the real spaceship and not a simulator,” Hurley said at KSC last week.

Hurley will act as commander for the upcoming mission, also taking part in two manual flying maneuvers while Crew Dragon is on orbit and when it’s closer to the ISS. Behnken will be the mission’s joint operations commander. He considers himself the “Swiss army knife” of astronauts.

“(I) may not be the best at everything that’s out there, but better than average at all of them, which I think goes a long way at making a great crew member on board,” Behnken said in a 2015 interview.

Hurley, 53, and Behnken, 49, also will be relying on their close bond to get them through. Hurley was the best man at Behnken’s wedding to fellow astronaut Megan McArthur, also in the 2000 astronaut class along with Hurley’s wife, astronaut Karen Nyberg. And they both have young sons.

Behnken told the Atlantic last year that “a man named Duane Ross was the lead for the astronaut selection process. In some sense, he picked my spouse for me; he picked my friends for me.”

Ahead of the launch, the astronauts were asked on Friday to describe each other.

“There is no way he doesn’t have every potential eventuality already thought about five times ahead of almost anybody else,” Hurley said.

Behnken said Hurley is “ready for everything all the time.”

“I’m just thankful that doing something like this, I’m doing it with Doug Hurley,” Behnken said.

As the two prepare for the monumental launch that will surely help them earn their spots in the Astronaut Hall of Fame, they spent the days before launch running through the mission and spending time with their families, who quarantined before the flight to ensure they could be on the Space Coast to see Hurley and Behnken fly in person.

Hurley and Behnken have been tested twice for the coronavirus and will likely be tested once more before the mission takes off.

Crowds for the monumental launch will no doubt be smaller than anticipated on the Space Coast due to the virus, while many of Behnken and Hurley’s family and friends won’t be at the Cape for the mission as planned, said Brenda Mulberry, the owner of Space Shirts outside KSC, who designed the shirts the astronauts’ families will wear.

The two most important spectators for both will likely their elementary-school-age sons, Behnken’s son Theodore and Hurley’s son Jack.

Last month, Hurley shared a drawing by Jack showing Crew Dragon taking off from Earth. “I love it,” he tweeted.

Behnken said he and his son, Theo, planted a lemon tree in commemoration of this flight and flew out to the Cape last year to see a SpaceX cargo mission. That’s when Theo gave him the OK to fly on Crew Dragon.

With the launch taking place in the summer, Behnken said he’s looking forward to sharing key milestones with his son throughout the mission, which will take between one and four months.

As for the teams responsible for taking the two astronauts to space and bringing them back, the gravity of the responsibility is weighing heavily on them.

Benji Reed, director of crew mission management at SpaceX, spoke about the responsibility at the completion of NASA and SpaceX’s flight readiness review on Friday, which gave the green light to move forward to the next steps of testing before Wednesday. He called the flight ahead a “sacred honor.”

“They are dads, they’ve got families back home,” Reed said. “We are needing to take care of the crew and bring them home.”