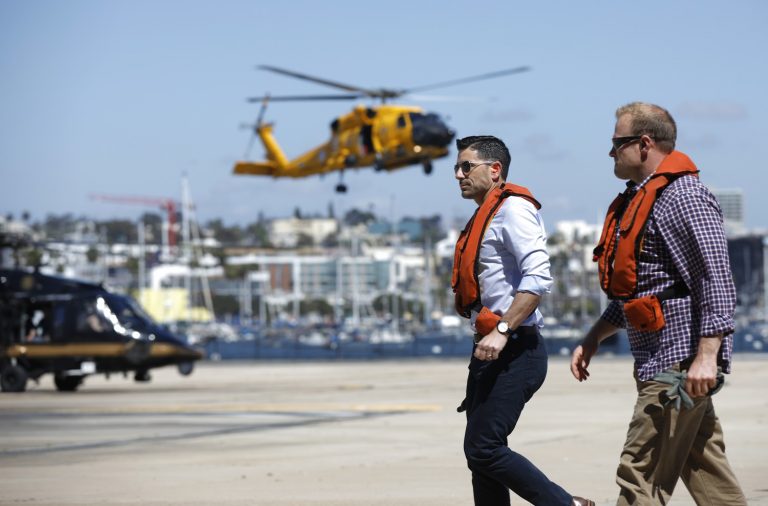 The U.S. Department of Homeland Security will consult its senior medical officer for recommendations on addressing the coronavirus pandemic in the Tijuana-San Diego border region, acting Secretary Chad Wolf said Wednesday during a visit to San Diego.

The restrictions on nonessential border travel put into place March 21 will likely be extended for the long term, he said, while officials explore the possibility of tightening enforcement of the new travel rules.

During a news briefing after the tour, Wolf said he will consult Dr. Alexander Eastman, the senior medical officer for operations at Homeland Security, for recommendations on addressing the coronavirus pandemic in the border region.

Wolf said Eastman had traveled to the San Diego-Tijuana region this past week, “taking a look at conditions not only here on the U.S. side, but conditions on the Mexican side as well.”

Local San Diego leaders and hospital administrators have raised concerns in recent weeks about the potential for the cross-border spread of the coronavirus as California officials eye reopening the state’s battered economy.

Hospitals in Chula Vista are seeing far higher rates of coronavirus patients than the rest of the county. Public health officials in Southern California have noted the growing outbreak south of the border could be having an effect on the amount of illness seen in San Diego and Imperial counties.

In Baja California, there have been 2,762 confirmed cases of the coronavirus and 459 people have died, state health officials reported Wednesday. Health experts believe the true number of cases and deaths is actually much higher because of severely limited testing across the state.

“I think it’s unique here to Tijuana-San Diego, individuals coming back over for medical procedures … ” said Wolf, who said he met with local San Diego leaders Wednesday to discuss the issue.

Some public hospitals in Baja California have run out of ventilators, including Hospital General in Rosarito, and there are only 20 of the machines left across the entire state within the IMSS public health system, Baja California Secretary of Health Alonso Pérez Rico reported Wednesday.

San Diego County Supervisor Kristin Gaspar sent a letter on April 19 to Vice President Mike Pence asking for federal assistance for both sides of the border, including mutual aid to Mexico to treat patients there and Federal Emergency Management Agency funds for hotel rooms for U.S. essential workers who live in Baja California.

“We’re only as strong as our neighbors,” Gaspar said Wednesday evening. “We are trying to be proactive, so we never reach a place where things are getting out of hand again and people start talking about a complete border shutdown that would be devastating to the economies in both countries.”

“We’re continuing to look at that to see if people are abusing that, but I will say again we have seen a significant drop in the non-essential travel,” Wolf said.

“Regarding U.S. citizens and legal permanent residents, again, the vast majority of folks we see coming across the border here in San Diego and San Ysidro, those are individuals who have a right to come back and forth across that border into the U.S.,” he said.