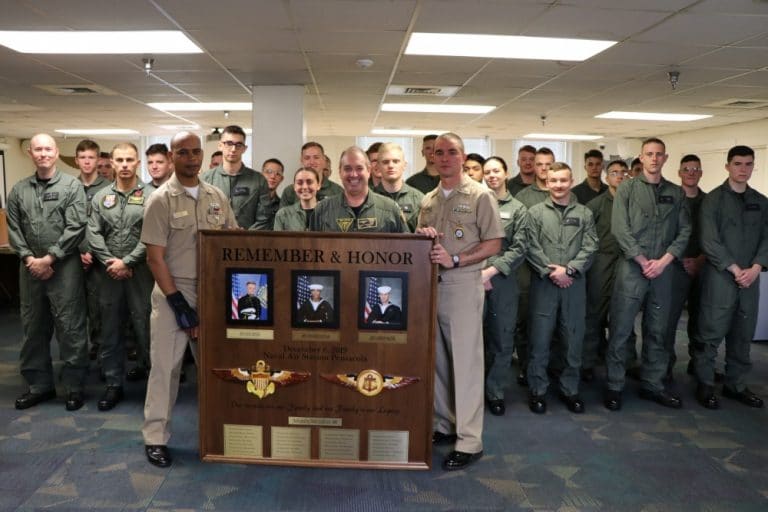 U.S. Marines and sailors killed or injured in the Dec. 6 shooting attack at Naval Air Station Pensacola, Fla. will receive the Purple Heart for their injuries, the U.S. Navy announced Monday.

Others who risked their lives to render aid to victims and even shielded fellow service members from gunfire will also receive awards for their heroism. The awards will be presented on March 16 at 10 a.m. at Pensacola’s National Naval Aviation Museum.

“The awards to be presented include the Purple Heart, Secretary of Defense Medal for Valor, Secretary of Defense Medal for the Defense of Freedom, Navy Distinguished Public Service Award, Navy and Marine Corps Medal, Navy and Marine Corps Commendation Medal, and Life Saving Award,” the Naval Education and Training Command said in a statement provided to Military.com.

The decision to give the awards comes after U.S. federal investigators determined the alleged shooter was motivated by radical Islamist ideology and that the attack was an act of terrorism. By determining the attack to be terrorism, the service members involved would qualify for the Purple Heart. The shooter, a Saudi military student who had come to the U.S. to receive flight training reportedly shared anti-American and anti-Israeli and visited a memorial to the 9/11 terror attack prior to the shooting.

When U.S. Attorney Gen. Bill Barr announced the results of the investigation of the shooting in January, he took time to recognize some of the heroic acts by those who first responded to the shooting.

“I want to draw special attention to two U.S. Marines: Gunnery Sgt. Ryan Maisel and Staff Sgt. Samuel Mullins,” Barr said. “They were outside the building when they heard gunfire and, although unarmed, they ran into the building to confront the shooter. Their only weapon was a fire extinguisher that they had pulled off the wall as they ran toward the gunfire. Who but the Marines?”

Barr continued, “I would also like to mention the heroic acts of Navy Airman Ryan Blackwell. The shooter shot Airman Blackwell five times, yet Ryan still managed to jump on top of a fellow sailor to keep her from being shot. He further assisted other students and helped them escape, all while taking additional fire from the shooter. Airman Blackwell’s heroic acts also saved countless lives that day.”

The U.S. military kicked out many foreign military students training in the U.S. after the shooting and have implemented new security measures to screen for and prevent potential future attackers.