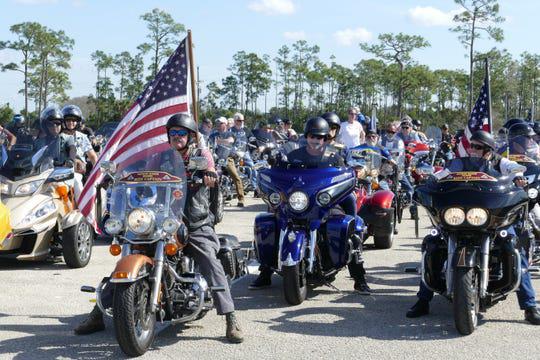 Over 500 bikers escorted a three-quarter scale replica of the Vietnam Veterans Memorial wall from Fort Myers to Marco Island on Tuesday.

The Wall That Heals honors more than 3 million Americans who served in the U.S. Armed forces in the Vietnam War and it bears the names of the 58,276 men and women who made the ultimate sacrifice.

Marco Island is the wall’s first stop of its 25th season and the only stop it will make in Florida.

Roger Spies, a Vietnam War veteran, was one of the first bikers to arrive at the Interstate 75 rest stop by exit 131 to escort the wall on his Harley Davidson Road King.

“Particularly in ‘Nam we had more POWs missing in action than in WWII and Korea,” Spies said. “This represents what they were and what they still are, the ones that didn’t come back.”

Spies was deployed two years before the Gulf of Tonkin Resolution of 1964 and again in 1965. He spent nine months in a WWII converted aircraft carrier called the USS Intrepid, now part of a museum exhibit in New York City, to support ground troops by fixing jet engines.

“It was a WWII carrier they converted so we didn’t have any air conditioning and we are in ‘Nam in the middle of the heatwave,” Roger said.

The art on his motorcycle included the Declaration of Independence, armed soldiers exiting a helicopter and a painting of himself in front of the Vietnam Veterans Memorial in Washington, D.C.

“When I came back, we didn’t use to talk about our experience (in the war),” Peters said. “I actually worked with guys […] at the Post Office sorting mail […] that were over there in Vietnam and never even told each other.”

Peters said veterans are now more open to talk about their experience during the Vietnam War since the memorial was dedicated in 1982.

“When the wall was dedicated, I was watching it on TV,” Peters said. “Finally, something came to honor those guys that did not come back.”

Peters said civilians in U.S. should not take out their frustrations about the wars in Afghanistan and Iraq against veterans like many did during and after the Vietnam War.

“Vietnam veterans felt this time […] we would not allow people to take out their frustrations about the war on that veteran,” Peters said. “I don’t care how you feel about the war or about our country fighting over there […] but when that veteran comes back to America he is not the policy maker.”

“If you take out your frustrations on anyone, take it out on the policy maker, not the veterans; they go where they are told to.”

Brett J. Reynolds, Marco Island resident, served with the Air Force over 20 years. He escorted the wall five years ago when it last came to Marco Island.

“I come because all military people are brothers,” Reynolds. “A lot of these guys gave their lives for their country.”

Tim Tetz, director of outreach for the Vietnam Veterans Memorial Fund, spoke to the bikers just before they turned on their motorcycles.

“Every time we go into a community we are going to have an escort like this […] because you guys realize the importance of the 58,276 names that are in that trailer,” Tetz said. “You guys understand for those veterans who came home that didn’t get a homecoming that they deserve a homecoming.”

“This is your homecoming today.”

Since its dedication, the wall has been displayed at nearly 600 communities throughout the nation. It is 375 feet in length and stands 7.5 feet high at its tallest point.

The wall exhibit includes a 53-foot trailer which transforms to become a mobile education center. The exterior of the trailer features a timeline of ‘The War and The Wall’ and provides additional information about the Vietnam Veterans Memorial in Washington D.C.

The last time the wall was in Marco Island was in 2015 and it was first brought to the island in 2011.