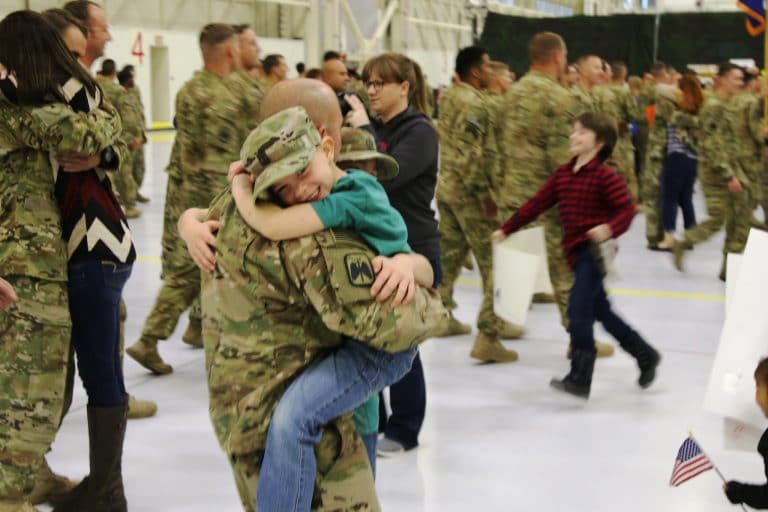 On Wednesday morning, kindergarten student Gabriel Minor thought he was going to hear from a guest speaker.

Sugar Creek Consolidated Principal Suzanne Marrs told the students, “We have lots of visitors here at Consolidated, but this person is a special visitor. Have any of you ever heard of the Army or the military?”

Gabriel told the principal that his mom is in the military. “I don’t get to see my mom, but I get to see my dad,” he said. His mom has been deployed.

At that point, Marrs introduced the special guest. “This is Misti Minor and she serves in our military. Do you know who this is?” she asked Gabriel. And Gabriel, with a huge smile on his face, said, “Mommy,” and he ran to his mom’s arms.

The two hadn’t seen each other in person for about a year. Misti Minor has been deployed in the Middle East, her second back-to-back deployment. She also was deployed to Afghanistan in 2017.

She’s been in the Army for 17 years and is critical care flight paramedic who does medical coverage in a UH 60M Blackhawk helicopter; she picks up the wounded and performs life-saving measures as they are transported to a hospital.

But on Wednesday, she was back home in West Terre Haute.

“I’m super excited” to be home and back with family, she said Friday. She and husband, Mark Minor, have six children in their blended family; the couple met in the military. While she hasn’t seen her family in person, they have been able to visit using Facetime, calls and texting.

“No one knew I was coming home,” Minor said.

While Gabriel was thrilled to be with mom, when she asked him if he wanted to get his things and “come home with mommy,” he told her, “‘No I want to ride the bus.’ He loves the bus,” Minor said.

Misti Roach Minor, originally from West Terre Haute, graduated from West Vigo High School in 2004. In high school, she was on the soccer and dive teams and also was a cheerleader.

“I decided I wanted to make a difference in the world, and my family was always in the medical field,” she said. She decided to join the army.

Returning home after a deployment is hard, she said. “It takes a long time to re-integrate back to life in society and family,” she said, especially after seeing injuries and death during her deployments.

This time, it has come easier, though, she said. “It’s a little weird sometimes. I’ve lived away from them so long I don’t know the routines,” she said.

Her husband is a “huge supporter,” she said.