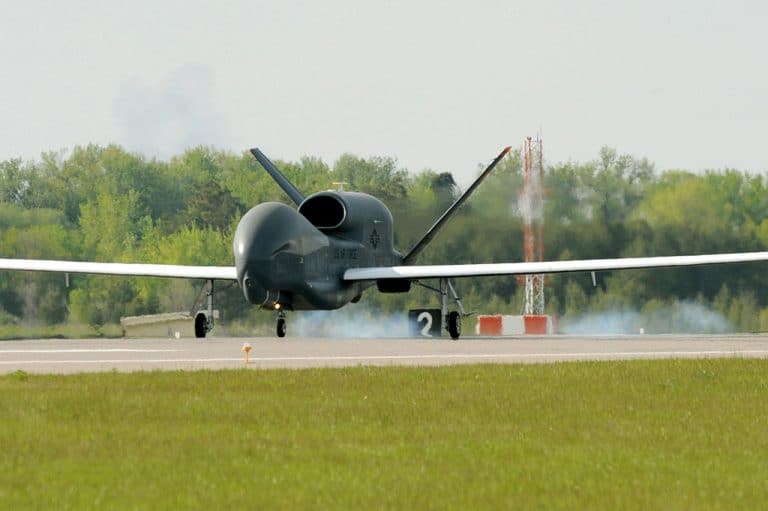 The RQ-4 Block 30 Global Hawk Remotely Piloted Aircraft arrived at the Air Force base in the city of Sacheon, South Gyeongsang Province, earlier in the day, the first of four units that South Korea is buying from the US as part of a 2011 deal. The other three are to be delivered by early next year.

Confirming its arrival, Lt. Col. Cho Se-young from the Air Force told a regular briefing that its operational deployment “will be pushed for normally in accordance with plans,” without further elaboration.

Remotely piloted with enhanced surveillance capabilities, the Global Hawk is optimized to scan large areas for both stationary and moving targets with high resolution, day or night, in all weather.

The high-altitude aircraft transmits data including imagery from an altitude of roughly 20 kilometers at near real-time speed and has a combat radius of 3,000 kilometers, so it has the Korean Peninsula and some areas beyond it within its range.

South Korea will now be able to independently gather intelligence on mainland North Korea, especially areas close to the capital of Pyongyang. Seoul has been heavily reliant on the US for that information until now.

The unmanned drone will also monitor Pyongyang’s transporter erector launcher, a vehicle that can carry and launch missiles.

Seoul plans to introduce other medium-altitude aerial vehicles in addition to the existing high-altitude spy drones to beef up its surveillance and reconnaissance capabilities.

Military tension is rising on the Korean Peninsula in the run-up to Christmas, when North Korean leader Kim Jong-un is expected to deliver a “Christmas gift” to the United States amid stalled denuclearization talks.

Aviation tracker Aircraft Spots said Monday that the US flew another surveillance aircraft over the Korean Peninsula. It said the plane flew some 9,400 meters above the peninsula, but didn’t reveal the time of the operation.

Observers speculate that the consecutive launches of surveillance aircraft being undertaken to check for provocations by North Korea, considering that denuclearization talks have not seen much progress ahead of the looming year-end deadline set by Pyongyang.

The North has warned it will pursue a “new way,” instead of dialogue, if the US misses the deadline. Earlier this month, the North carried out rocket engine tests twice at its Sohae Satellite Launching Station, better known as the Tongchang-ri site, which are feared to be part of preparations to fire an intercontinental ballistic missile.

With China and Russia teaming up to pursue the easing of UN sanctions against Pyongyang, US special envoy for North Korea Stephen Biegun made stops in Seoul, Tokyo and Beijing last week to discuss denuclearization with his counterparts.

Whether the top US nuclear negotiator made any behind-the-scenes contact with North Korea was unclear, but his overtures for talks were not publicly answered by Pyongyang.

Addressing questions at a press briefing Friday about the possibility of provocations from Pyongyang around Christmas, US Defense Secretary Mark Esper said the US was ready “to fight tonight” if necessary, while at the same time highlighting diplomacy with Pyongyang.

“I remain hopeful that we could get the process started again and remain on the diplomatic path,” Esper said.