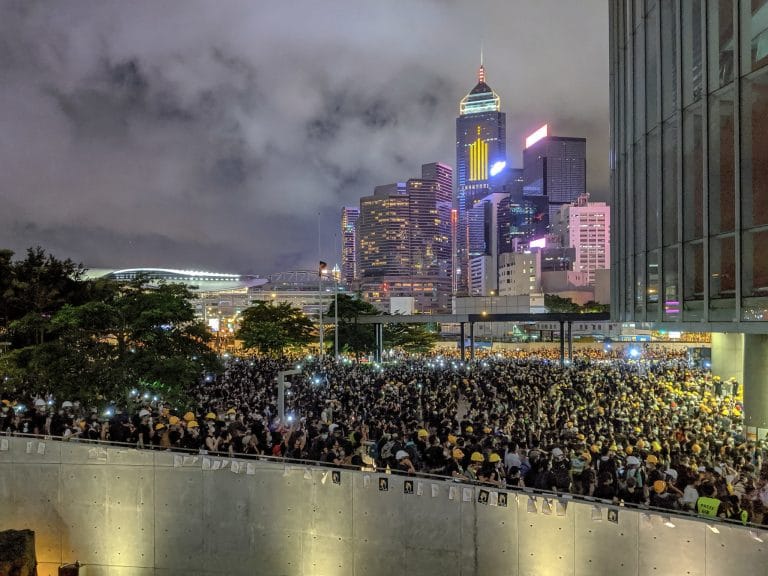 Hong Kong police on Thursday said they had frozen donations to a group funding legal support for arrestees during the six-month-old protest movement, as pro-democracy activist Joshua Wong on Thursday accused them of hacking his phone for evidence.

The alliance is one of two crowd-sourced funding initiatives that have collected millions of dollars in funding to aid and assist people arrested and being prosecuted for their part in the protest movement that has gripped Hong Kong since early June.

But police said that some of the money had been transferred to a shell company, and later used to buy insurance.

Four people aged between 17 and 50 were arrested for “money laundering,” including the alleged director of the shell company who was the beneficiary of the insurance.

“We seized receipts mentioning that 3,300 coupons had been purchased. We also seized some arrows, some weapons,” he said. “We do not exclude the possibility that the fund was used as a reward to encourage teenagers to come out and join in the civil unrest.”

Spark Alliance — which last month said it had stopped receiving donations to its HSBC account — said the police were trying to “smear” the group, but didn’t comment further while legal proceedings were under way.

The pro-democracy political party Demosisto said the move was a deliberate attempt to frame the protest movement.

“When #HongKongers tighten their belts to donate to Spark Alliance to help arrested #hongkongprotesters, #hkpolice has just frozen their money and framed as money laundering,” the party said in a statement via its Twitter account.

“It’s the prelude to further crackdowns on #HKprotests, just like what #CCP did on civil society in #China,” the group warned.

“This money was raised to support the legal fees of those facing political prosecution, crowdfunded by Hong Kongers,” the group said via Twitter.

“The freezing of these assets is appalling, and sets a dreadful precedent in one of the world’s major financial centres,” it said.

Meanwhile, Demosisto leader and former Occupy Central student leader Joshua Wong, who is being prosecuted once more for his role in the current pro-democracy movement, said police had presented evidence for the prosecution that included text messages from his locked smartphone.

“[When I was]  arrested on Aug. 30, my phone was seized by [Hong Kong police],” Wong wrote in a statement on his Facebook page. “The phone can only be unlocked with passwords. Before court resumed yesterday, I have NEVER provided any passwords to #police, nor received any notice nor warrant for a search of my mobile device.”

But a list of evidence submitted to the court by police included four text messages sent from Wong’s phone, he said.

“Police can even identify how the messages were sent out, whether it’s from a mobile or desktop version of the app,” he said. “Since such functions cannot be found on ordinary user interface, that can only be possible with the help of state-sponsored hacking.”

“Such [a] warrantless search is … a blunt violation of the freedom and privacy of communication enshrined in [Hong Kong’s mini-constitution, the] Basic Law,” he wrote.

“Now it seems state-backed hackers get involved in the crackdown on Hong Kong movement. I urge all #hongkongers to strengthen your cybersecurity,” Wong said.

Protesters continue to call on the administration of chief executive Carrie Lam to meet all five demands of the protest movement, which include full democracy and an independent inquiry into police violence against protesters.

While Lam has formally withdrawn widely hated plans to change Hong Kong’s extradition laws, she and her officials have repeatedly ruled out meeting the other four demands.

Protesters have continued to take to the streets in their hundreds of thousands, after a landslide victory of pro-democracy parties in last month’s District Council elections.