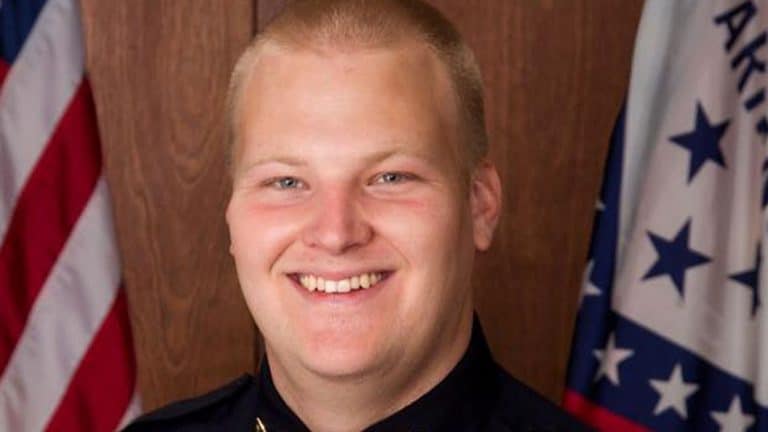 A 35-year old man from Arkansas was shot dead Saturday night just after he “ambushed” and killed a police officer who was sitting in his patrol vehicle outside the Fayetteville police station.

Police officers inside the station heard gunshots at approximately 9:42 p.m., and went outside to find Officer Stephen Carr, 27, had been shot inside his patrol vehicle. Police heard more gunshots before encountering the suspect, London Phillips, of Fayetteville, Ark. Phillips was shot as he was fleeing the scene in the alley between the police station and the city prosecutor’s office, and died of his wounds, Fox News reported.

“It appears the suspect came into the back parking lot and just executed my officer,” Fayetteville Police Chief Mike Reynolds said at a brief news conference, noting that Carr was in his car because he was waiting for his partner in the parking lot when the shooting happened.

“Evidence shows that Officer Carr was ambushed and executed while sitting in his patrol vehicle,” police said.

Fayetteville police officers had a brief history with Phillips, according to Reynolds, which included an incident in December 2018 when they received a report that Phillips impersonating a police officer.

Phillips was “looking for an officer to kill,” Reynolds said, calling the attack a “cowardly act.”

He added: “I have no information that leads me to believe he targeted this officer specifically.”

The Fayetteville Police Department hired Carr in April of 2017 and was assigned as a patrol officer.

“He served our community with dedication and professionalism for the past 2 ½ years, he is a HERO,” the Fayetteville police added. “We would like to thank our community for their outpouring of support, along with our local, state, and federal law enforcement partners for their quick response and assistance. Our thoughts and prayers are with Officer Carr’s family during this tragic time.”

The officers involved in the shooting “have been placed on paid administrative leave in compliance with city and police department policy until the Chief of Police is able to review the findings of the investigation,” the department said.

The fatal shooting of officer Carr is just the most recent killing of a police officer in the United States, where working in law enforcement is considered one of the most dangerous jobs. A Houston police officer was also shot dead Saturday night while responding to a domestic violence call.

In 2019 alone, 113 police officers have died in the line of duty as of early December. Causes range from vehicular accidents to medical emergencies to homicides.