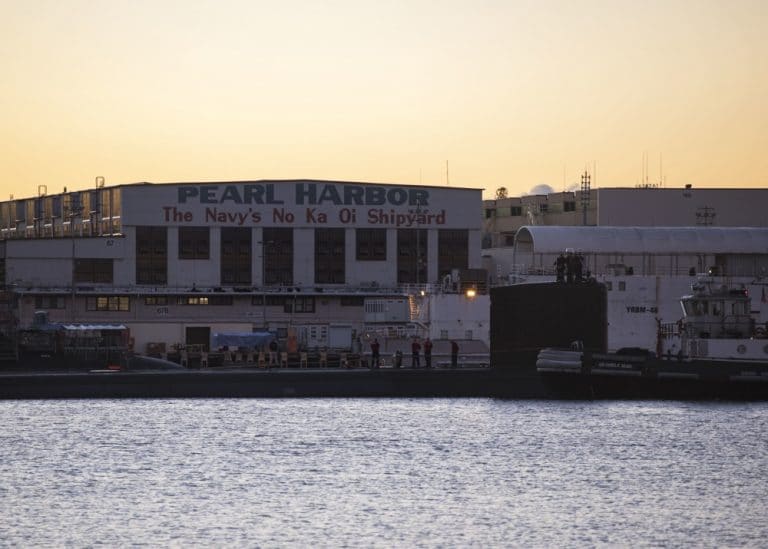 With more than 6,000 employees, Pearl Harbor Naval Shipyard is one of the busiest places to work in Hawaii.

The shipyard, which has four dry docks for submarine and surface ship repair and maintenance work, is the largest industrial employer in the state.

The facility, which dates back more than 100 years, contributes about $1 billion annually to Hawaii’s economy and is a beehive of activity from a mix of civilian and military workers.

On Wednesday, this mix dominated by civilian workers suffered a tragedy when a sailor stationed on the USS Columbia submarine in Dry Dock 2 for maintenance fatally shot two civilian workers and injured a third.

Rear Adm. Robert Chadwick, commander of Navy Region Hawaii, said the shipyard workforce is a major part of the ohana, or family, at Joint Base Pearl Harbor-Hickam.

“Generations of locals have worked in that shipyard,” he said. “Our sincere thoughts are with the families of the victims.”

According to Naval Sea Systems Command, an arm of the Navy also known as Navsea, the Pearl Harbor shipyard is the largest fully integrated military-civilian workforce involved in full-service shipyard work in the U.S., with about 4,850 civilian and 498 Navy personnel.

The shipyard covers 148 acres, includes close to 150 buildings and traditionally supports 21 submarines in Hawaii and Guam along with 10 surface ships.

Last year, the Navy announced a desire to upgrade shipyard dry docks and other facilities at a cost of $5 billion over 20 years.

Origins of the shipyard date back to 1887 when King David Kalakaua granted the United States the right to establish a coaling and repair station at Pearl Harbor under an update of the Reciprocity Treaty of 1875.

The shipyard was officially established in 1908. The first dry dock was finished in 1919 and today remains the largest dry dock at the harbor. Three more dry docks were built in 1941, 1942 and 1943 during World War II.

Pearl Harbor Naval Shipyard played a crucial role in the war, and has continued to provide vital support in what Navsea said is the Navy’s largest, most comprehensive fleet repair and maintenance facility in the country.

On Dec. 7, 1941, the destroyers USS Cassin and USS Downes along with the battleship USS Pennsylvania were hit by attacking Japanese planes while in Dry Dock 1.

According to Navy accounts, one shipyard worker moved a crane to shield the Pennsylvania from attack next to the destroyers that were damaged beyond repair, and other workers put out hundreds of fires, organized an ammunition-passing party, worked on disabled boats’ engines and cut men out of hulls of sunken ships.

Five months later, the badly damaged aircraft carrier USS Yorktown limped into Pearl Harbor after fighting in the Coral Sea and some 1,400 shipyard workers got the vessel back into action within 72 hours for the pivotal Battle of Midway.

The motto of the shipyard since then has been “We Keep Them Fit to Fight.”

“The men and women of Pearl Harbor Naval Shipyard continue the resilient lineage of shipyarders who have given their blood, sweat and determination in defense of our nation,” Navsea explains on its website.