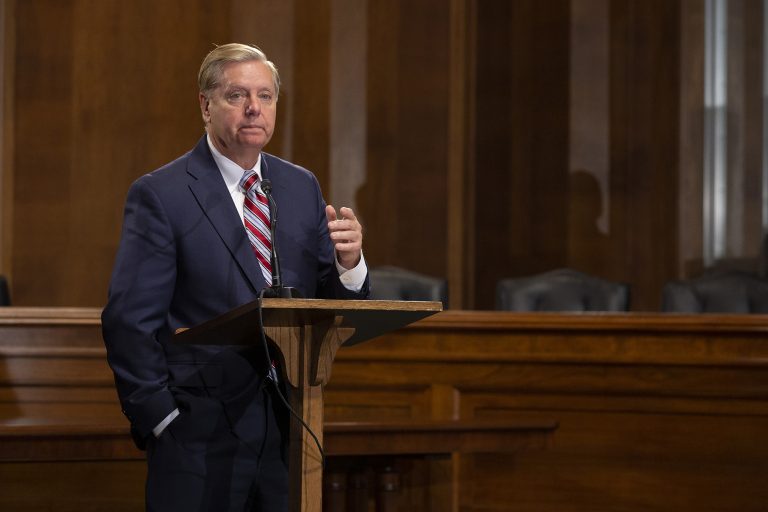 South Carolina Republican Lindsey Graham and Maryland Democrat Chris Van Hollen said in a letter dated Monday that Turkey’s acquisition of the S-400 anti-aircraft weapons should trigger sanctions under the Countering America’s Adversaries Through Sanctions Act. The two senators cited Turkish and Russian officials who said Turkey isn’t only testing the systems but also has plans for further cooperation with Russia.

“The time for patience has long expired,” Graham and Van Hollen wrote in the letter. “It is time you applied the law. Failure to do so is sending a terrible signal to other countries that they can flout U.S. laws without consequence.”

The senators previously warned that Turkey’s decision to use Russia’s S-400 system could undermine the NATO ally’s participation in buying and helping to build the U.S.-made F-35 fighter jet. The Pentagon has said it is in the process of removing Turkey from the F-35 program.

Pompeo told reporters Nov. 26 that Turkey’s move to adopt the S-400 is “concerning” but that “we’re still taking to the Turks.”

He said “we have made very clear to the Turkish government our desire to see them move away from” putting the S-400 “into full operationalization.”

Graham and Van Hollen introduced a bill in October that would sanction Turkish leaders, financial institutions and energy sector in response to Turkey’s invasion of northern Syria after President Donald Trump said he would withdraw U.S. troops from the region. Graham, who is otherwise a close Trump ally, has sharply criticized the president for not taking a tougher stance with countries like Turkey, Russia and Saudi Arabia.

The sanctions proposal from Graham and Van Hollen includes a provision to prohibit U.S. purchases of Turkish sovereign debt. Other sanctions measures — including a bill passed by the House in October and another proposal in the Senate — don’t include the sovereign debt ban.

The Senate Foreign Relations Committee is expected next week to consider an alternative Turkey sanctions bill, sponsored by the panel’s Republican chairman, Jim Risch, and ranking Democrat, Bob Menendez. Those sanctions would also seek to punish Turkey for its military offensive in northern Syria, as well as requiring the Trump administration to impose the penalties already required by current law for the purchase of the S-400 missile system.