Pompeo warns US needs to confront Communist China ‘head on’ 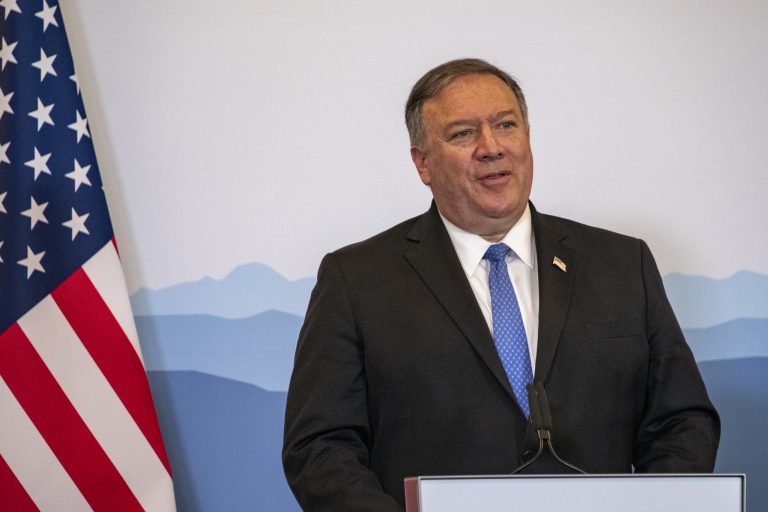 U.S. Secretary of State Mike Pompeo said on Wednesday the United States needs to confront the challenges that Communist China poses “head on.”

Pompeo made the remarks raised the prospect of Chinese tensions even as the U.S. prepares to implement a new trade agreement. According to Reuters, Pompeo said he would continue his criticisms of China in the coming months, noting influence campaigns by Chinese intelligence agencies, as well as “unfair and predatory” economic practices.

“They are reaching for and using methods that have created challenges for the United States and for the world and we collectively, all of us, need to confront these challenges … head on,” Pompeo said at the Hudson Institute think tank’s gala dinner in New York.

“It is no longer realistic to ignore the fundamental differences between our two systems, and the impact that … the differences in those systems have on American national security,” Pompeo continued.

Additionally, Pompeo called the hostile nation out for its human rights record against its own people.

“Today, we’re finally realizing the degree to which the Communist Party is truly hostile to the United States and our values,” he said. “We are able to do this because of the leadership of President Trump.”

China’s ambassador in Washington, Cui Tiankai, said in a speech on Monday that China would not take any criticism of the Communist Party, claiming they are “deeply trusted and widely supported by the Chinese people.”

“To draw a line between the Party and the people is to challenge the entire Chinese nation,” Cui said. “Claiming to welcome a successful China on one hand, and defaming and working to overthrow the very force that leads the Chinese people towards success on the other, have you ever seen anything more hypocritical and outrageous than this?”

“Pompeo’s remarks were a vicious attack on the Chinese Communist Party and the Chinese government. It drives a wedge between the Party and our people and it smears our domestic and foreign policy,” Geng said.

“As we talk about the rise of China, the gap [between American and Chinese innovation] is narrowing,” McRaven said.

“We need to make sure that the American public knows that now is the time to do something,” he went on.

Despite these open exchanges of criticism, Trump is still expected to establish the first phase of a trade deal between the U.S. and China. This apparent U.S. commitment to a deal comes even after a China withdrew from an Asia-Pacific Economic Cooperation (APEC) conference it was hosting and where U.S. officials would have finalized the agreement.