White House ‘does not seek confrontation with China,’ Pence says 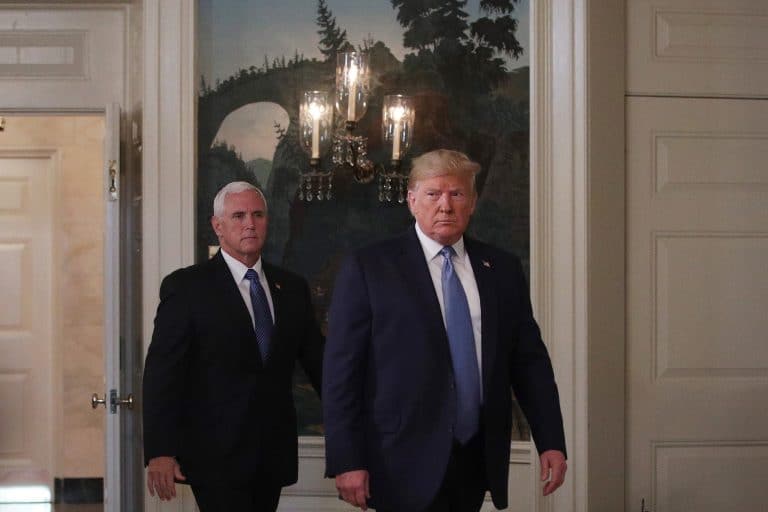 Vice President Mike Pence on Thursday credited President Donald Trump with altering U.S.-China relations “forever,” saying the decades during which “we rebuilt China … are over.”

“Past administrations have come and gone; all were aware of these abuses. None were willing to upset the established Washington interests who not only permitted these abuses, but profited from them,” Pence said during what his office billed as a major policy speech. “The political establishment was not only silent in the face of China’s economic aggression and human rights abuses, but enabled them.”

The vice president, who as a member of House GOP leadership long was part of the very Washington “establishment” he panned, criticized Beijing’s “arsenal of policies that are inconsistent with free and fair trade.” He dinged China for “unfair trade practices” and noted “China’s economy continues to fall behind” while declaring America’s economy the “strongest in the history of the world.”

Pence accused leaders in Beijing of wanting “a different American president,” saying that amounts to the biggest verification that Trump’s trade policies are working. “But this administration will not stand down,” he warned.

Yet, even as Pence warned China on its trade practices and other aggressive acts, like its sometimes tough tactics in the seas around Asia, he said the Trump administration “does not seek confrontation with China” and seeks “practical cooperation.”

“We seek a level playing field, open markets, fair trade, and a respect for our values,” Pence said at an event hosted by Washington’s Wilson Center, a nonpartisan think tank.

“We are not seeking to contain China’s development. We want a constructive relationship with China’s leaders, like we have with China’s people,” he said. “And if China will step forward and seize this unique moment in history to start anew by ending the trade practices that have taken advantage of the American people for far too long, I know President Trump is ready and willing to begin that new future, just as America has done in the past.”

Pence said he hopes an interim trade pact between Washington and Beijing could be signed before a major Asia-Pacific economic conference in Chile slated for Nov. 16 and 17.

Pence’s annual China speech comes almost two weeks to the day after Trump announced an interim trade pact with the Asian economic giant. The president on Oct. 11 dubbed it “phase one” of what he expects to be a multiple phase pact, but that amounted to another a reversal for Trump.

As recently as Sept. 20, however, Trump was still dismissing the notion of striking a trade deal with China that covered only some of the issues the two countries have been discussing since he took office in January 2017.

“We’re looking for the big deal,” he said that day during a joint news conference with Australian Prime Minister Scott Morrison.

But just a few weeks later, he agreed to just that. Trump denied in late September that his reelection chances could partly depend on a deal with China — multiple polls show him trailing a handful of leading Democratic candidates, both nationally and in key battleground states.

“No, I don’t think I need it before the election,” he said alongside Morrison.

Four days later, however, Speaker Nancy Pelosi of California announced a formal impeachment inquiry over his July 25 call with Ukraine’s new president, on which he asked Volodymyr Zelenskiy to “do us a favor” by investigating Democratic candidate and former Vice President Joe Biden and his son.

As polls moved dramatically to a majority of Americans supporting his impeachment and even removal from office, Trump had renewed interest in an interim trade pact with America’s top economic and military rival, calling the “phase one” agreement “substantial.”

The White House has long said the kind of pact it was pursuing with the Chinese would not require congressional approval the way a revised deal with Mexico and Canada would. Though Congress is not expected to weigh in, what the president announced on Oct. 11 and Pence praised on Thursday has been met with some skepticism on Capitol Hill — including by some of Trump’s usually close allies.

“They don’t ever comply with anything,” the Commerce, Science and Transportation Committee member told Fox News, suggesting China’s latest vow to buy more U.S. farm products already is showing signs of unraveling. “They are not our friend.”

“Unfortunately, this détente is likely temporary. The compact elides far more issues than it addresses. To reach a comprehensive trade deal, the United States and China will have to consider scaling back the bilateral tariffs … as well as limits on investment, forced technology transfer, and perhaps address human rights and national security concerns that have been thrown into the mix via U.S. export controls and other restrictions,” according to a white paper from the nonpartisan Center for Strategic and International Studies.

“(The) deal gives President Trump a short-term win and will briefly buoy the stock market,” according to CSIS, “but without substantive structural changes to the U.S.-China relationship, choppy waters lie ahead.”

The vice president also weighed in on several ongoing matters that could alter U.S.-China relations.

“Hong Kong is a living example of what can happen when China embraces liberty,” he said. “And yet, for the last few years, Beijing has increased its interventions in Hong Kong and engaged in actions that curtail the rights and liberties that Hong Kong’s people were guaranteed through a binding international agreement.”

He also addressed the NBA’s feud with Beijing since a Houston Rockets executive tweeted support for protesters in Hong Kong.

“And some of the NBA’s biggest players and owners, who routinely exercise their freedom to criticize this country, lose their voices when it comes to the freedom and rights of other peoples,” he said in a barely masked swipe at NBA superstar LeBron James. “In siding with the Chinese Communist Party and silencing free speech, the NBA is acting like a wholly owned subsidiary of the authoritarian regime.”