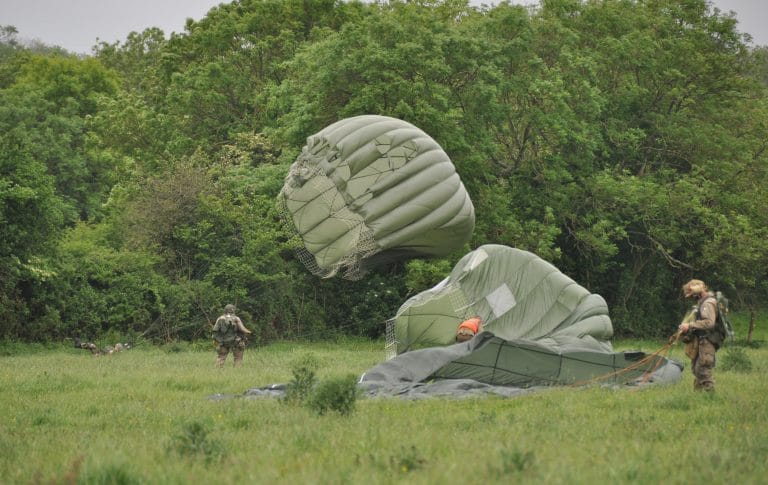 The invasion of Normandy by Allied troops more than 75 years ago was a turning point in World War II.

One of the men that parachuted onto Normandy Beach was Levern Homan of St. Marys, Ohio.

He died on March 23, 2007, but the pride his family has about his service to his country continues to live. When re-enactors recreated the D-Day invasion in June, some items belonging to Homan were sent with them.

On Saturday, those items were returned to Mike and Cindy Homan in a brief ceremony at the Lauer Historical Farm, the site of the WWII Living History Re-enactment event.

Sean Graham, one of those re-enactors, made the trip to France in June to jump with the items which included Levern’s picture, a 501st patch and a pair of jump wings.

“What the veterans went through is just amazing and what they did for all of us is amazing,” said Graham. “To honor them in any way shape or form, I will step up in a heartbeat to do it. It just brings a tear to the eye, chokes you up a little bit because of the sacrifice they made. So I’m more than willing to make a jump for them and I will continue jump as long as I can. And continue to reenact because that’s what we do it for us to honor the veterans.”

“The whole family is very grateful for this,” said Mike Homan.

He was asked what his father might have thought of all of this. “I think he just probably thought you’re making too big of a deal (out of this),” said Homan.

Homan is appreciative of the weekend long demonstrations at the Lauer Historical Farm on Roush Road.

“Well, I like history and it’s because of that I think what they do is great. There are people who wouldn’t have an idea of not only what my dad’s group did, but anybody in the service, what they really go through. I think it’s great,” said Homan.

Cindy Homan echoed Mike’s sentiments. “Seeing all the different little tents and how they’re interacting with the people, and so many kids are here, and the kids just love it. They soak it up,” she said.

“We no longer had dad’s jump wings. So Sean, on his own, took it upon himself or Mike, one of them took it upon themselves, to get a set of jump wings and jump with them. So it’s nice to have that with that all of dad’s artifacts now. They really went above and beyond and it’s really very gratifying,” she said.